My name is Jessie Valentine and I have a confession to make:  I am completely obsessed with the soy nuggets at Whole Foods Market!  I first found these delicious little meatless nuggets of bliss a few years ago while circling ’round the salad bar and since then I’ve been hooked.  Unfortunately for my wallet, a 1 lb. container of soy nuggets typically cost about $10, and as someone who is on a food budget, I wanted to find a way to make my own (similar) type of soy nugget.

The consistency of the soy nuggets at WFM are like a less chewy/spongy version of seitan.  If you’ve never tried seitan, it’s a meat replacement made up of wheat gluten and typically seasoned with soy sauce or some kind of vegetable broth base.  For my version of soy nuggets, I used soy flour along with vital wheat gluten.  You can buy vital wheat gluten and soy flour at any health food store.  It’s typically found in the baking/flour section.  I used Bob’s Red Mill brand for both.

For flavor, I used three different marinades, thus making three different flavors of these nuggets.  Feel free to use whatever you have available or if you have a certain flavor in mind (spicy, teriyaki, bbq, etc.) use dressings/sauces/seasonings that you prefer.

I hope you try this recipe and feel inspired to make your own homemade versions of your favorite foods. 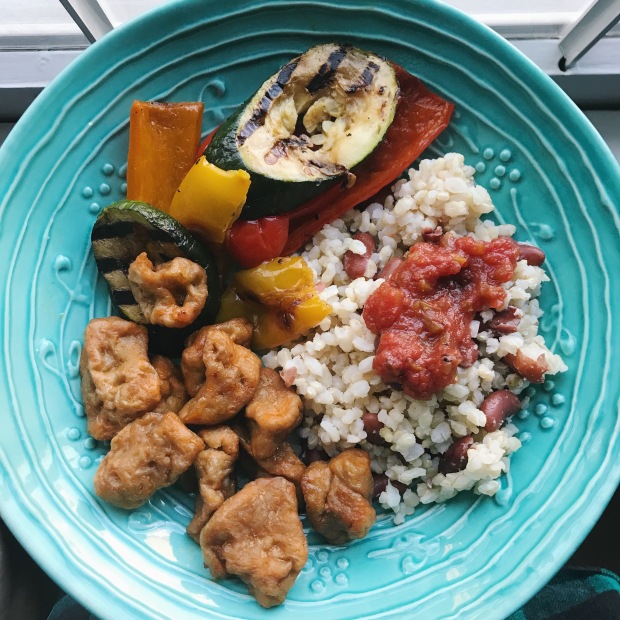 I served mine with some brown rice, beans, and veggies.

Three varieties fresh from the oven

Ah…that is my sigh of relief because I’m officially on “vacation” from my internship rotations for the next two weeks.  Yesterday was the last day of my community rotation.  If you read my last post, I’ve been working with the senior population, mostly in the scope of the meals-on-wheels program and other community programs for senior citizens.  I didn’t know what to expect of my community rotation.  Before I got into the dietetic internship, I worked in community nutrition as a nutritionist for the Women, Infants, Children (WIC) program, so I did have some experience in public health but clearly the WIC program is quite different than a program for senior citizens.  Anyway, my community rotation was fantastic.  I loved working with seniors and sharing nutrition knowledge.  If you read my last post, this rotation involved some public speaking along with making healthy baked goods to share with individuals at senior community centers, which was fun!  During this rotation, I had an amazing preceptor that truly wants interns to succeed and learn from each rotation which made it an overall positive experience.

I’m looking forward to this little break from the internship.  I’m hoping that I’ll have more time to devote to yoga, painting, running, taking long walks outside (my vitamin D levels are probably so low right now, thanks to winter), and just enjoying the holiday season.  I hope you have time to reconnect with yourself, too.

© Jessie Valentine, 2013-2021 and Vitamin Valentine LLC, 2021. Unauthorized use and/or duplication of this material without express and written permission from this blog’s author and/or owner is strictly prohibited. Excerpts and links may be used, provided that full and clear credit is given to Jessie Valentine and vitaminvalentine.com with appropriate and specific direction to the original content.